Minden UniHawks and Frontliners Spartans had the privilege to play the very last match of Division-1 and end the Penang Floorball League 2008! What an honor to have so many eyes watching the game. Not forgetting the limelight they were in with the presence of YB Koay Teng Hai, Deputy Minister of the Penang Youth and Sports Ministry as well as reporters and photographer from The Star Newspaper! It was truly an honor to have YB Koay and the The Star representatives with us!!

It was a very important match for 3 teams basically, Frontliners Spartans, Minden UniHawks and Innebandy!CO. A win for Frontliners Spartans would mean the silver medal is theirs to keep. A win for Minden UniHawks would have them redeem their pride after losing the other 5 matches and also a blessing for Innebandy!CO which will then take home the silver. Contact FireAnts were spared from this pressure as we have sealed the victory last Tuesday! A definite relief for all of us! Phew!!

Final result? With nothing to lose, Minden UniHawks rose up to the occasion and fought a good fight on court with a score of 5-3 and gave the silver to the Innebandiens. Many predicted that Frontliners Spartans would have won the game, considering the fact that they were more experienced. But as the saying goes...the ball is round, and you would never know where it would end! On a personal note, Frontliners Spartans had improved much as a team in terms of skills! Keep it up!

And the moment where everyone was waiting for…the speech by the PFA Acting President, Mr. James Looi followed by presentation of medals to the winners and not forgetting, the Challenge Trophy that we, FireAnts have worked very hard for!! It was truly a grand finale and a glorious moment for those in Team Contact! Thank you YB Koay for gracing the occasion and presenting the medals. Thank you supporters and everyone in Contact (be it FireAnts or Bullets)! You all are truly a fiery force to be reckoned with!
Ready? 3...2...1...CONTACT!!!!! 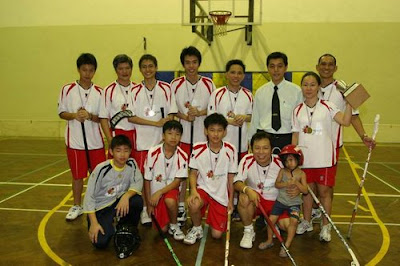