It was a surprise to most of us, but excitement filled the air as smses were sent back and forth concerning the article that appeared in The Star yesterday (18 April 2008) which featured the recent Penang Floorball League and a full blown picture of the FireAnts with their medals and trophy. "How many copies of the newspaper did you buy?"... Well, most of the team members had at least one copy to savour but a few in the team bought more than that to send the article to family and friends who don't get the northern version of The Star. We have included it here, so that you can have a read of it as well. Floorball IS DEFINITELY Making Inroads! 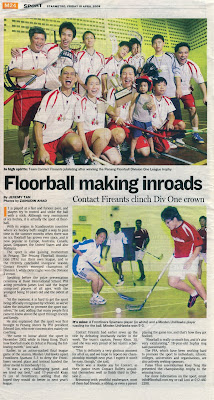