Once again the International Floorball Federation (IFF) together with the Singapore Floorball Association organized the Coaching and Refereeing Seminar during the Asia Pacific Floorball Championships (APAC). This year the Seminar was held at the beginning of APAC instead of the end unlike last year. Participants from Malaysia were our very own Edward, Penny, and James (all three representing the Penang Floorball Association); Dennis and Suresh (representing the Selangor Floorball Association); and Jason Selva also from Penang.
James and Suresh attended the Refereeing Seminar and they teamed up at the end of the seminar to referee in one of the games in APAC. It was a great experience and exposure for the both of them as they teamed up together for the first time. Even greater the experience for James as this was the first time he has refereed in an international floorball game.

Except for Penny who attended the Organisation Seminar last year, this was the second IFF Coaching Seminar for the rest of us. A very good refresher for all of us as this year the seminar proved slightly different as it was a little more tactical in it's approach and thus, very beneficial to all of us.

Penny is the only person who has attended 2 faculties in the Seminar, namely Coaching and Organization. Perhaps the challenge for her is to attend the Refereeing one next year. ;) 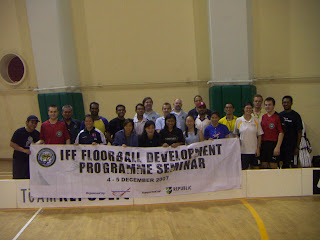 Group Photo of the participants of the IFF Seminar 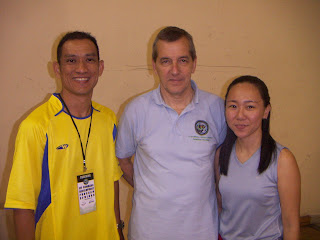