The battle of the best is ON again with the recent Dalat Floorball Challenge held on 29 and 30 September 2007. Here’s the unfolding story of our fellow comrades who fought a good fight, leaving the opponents awestruck by our performance throughout the entire tournament.

CONTACT Y comprised in majority the junior players with exception to a few. They are Richard (Captain), Joshua Lim (Goalie), Serene, Seow Fei, Calvin, Joshua Lam, Eythan, Joseph, Ian, Ben Lim, Ben Ong and Isaac Ng.
Besides gaining exposure and experiences, the target for CONTACT Y was to beat at least one team. Although formed by majority of junior players, CONTACT Y was well known for tight defending. Rumours had it saying that CONTACT Y may end up in semi finals just by defending goals from the opponents. Well, that did not happen...
The 1st game against Minden Underdawgz 1 was indeed a very good match. Both teams had almost the same strength except for the size of individual players. The game came to a draw of 0-0. CONTACT Y could have won this game if not for the pressure of being the first to play in tournament.
The 2nd game against Subang Rascals was a very tough game. CONTACT Y was expected to lose sorely but the end result was quite bearable considering the fact that Subang Rascals had more experienced, skillful and fast players. Ian managed to block a few shots by opponent, Sasi who is very much well known for his air-hook and hard shots. We lost by 6-0.
The 3rd game was against Dalat 2. Great efforts by each player were shown throughout the game although we still lost by 3-1. Dalat had very aggressive and fast runners which was one of the factors why we lost to them.
The final game was against Innebandy! Co. Although the last game, and no hope of entering into semi-finals, it did not deter the team from playing a good game. There were a lot of shots taken but sadly not on target. Our Captain, Richard a.k.a. the young man showed extreme enthusiasm to keep the team together, playing their hearts out to beat the opponent. A lot of good shots taken by our attackers and good save by our goalie. At last, Calvin made the team proud by scoring a goal against the national keeper, Kao Lin Ken. End result 3-1 lost to Innebandy! Co.
Overall, CONTACT Y did an extremely great job. Although we did not meet our target of beating at least one team, we were able to get a draw against Minden Underdawgz 1 plus we did not get trashed terribly by the other opponent teams. Definitely there is still a lot of room for improvement. Given the time and discipline, I believe this team will be making waves and history in the near future. Hip! Hip! Hurray! For all in CONTACT Y! 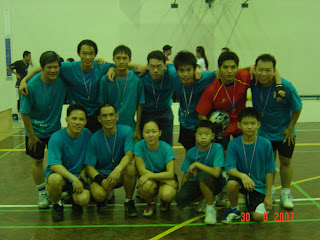 Our target was to make it to the finals thus our strategy was to win all games and with a big goal difference to secure the first place in Group B. We determined in our hearts to really make our efforts and presence felt in this tournament. With the leading of our Coach Edward, we are sure we will somehow taste our victories this tournament.
Our first match against Salibandy! Co is a MUST win. Thus our strategy was not to allow any room or space for their deadly attacker to take a single shot. As for us we will take all the opportunities to shoot at goal and go for rebound. This starter game did not have a good effect on the team as a whole. We were just not getting into our game. However, with the scuffle and shuffle in front of their goalie, an own goal gave us our first win in the tournament! 1-0 to us!
We expected our 2nd game against Dalat 1 to be a tougher one. Indeed it was. We were still trying to get into the game and were sucumbed to play at their pace. A mistake that gave the game away. With that, we were caught by their quick counter attacks. But thanks to our Goalie, Yung Ming for his very good saves that left us with just a lost of 0-3 to Dalat 1.
1 win, 1 lost?! By then, we believed we have very good chance to make it to the semi, and ultimately the final!
Our 3rd game was against Frontliners. Another game that we MUST win to secure our placing! After our first two matches, we were a bit more calmed and focus. There were a few changes to our initial line-up. With Nicholas as the centre in the first line, we scored our first goal within seconds after the first face-off. Subsequently, Nicholas and Bryan continued to make wonders to secure a win over Frontliners with score 3-0.
Our final match was against Minden Underdawgz 2. It was quite an easy game. We were in control of the game a whole lot better compared to the previous 3 games. With less pressure from the opponent, we won the game by a score of 5-0.

Semi-Final: CONTACT X vs Subang Rascal
It was not our target to meet them at the semi-final. However due to our lost to Dalat 1, we had to settle for this. We knew it was not going to be an easy game. With all that we’ve got, we were determined not to make the game any easy for the opponent. It was perhaps the most exciting game throughout the tournament (well, at least to me!). Bryan scored the first goal in a counter attack that gave us the lead of 1-0. However, Sasi returned us another goal to make it to a draw of 1-1. We expected that very goal from Sasi, but we were too slow to respond. With that we had the penalty shots to determine the winner and finalist for the tournament. Our chosen ones to take the penalty were Bryan, Nicholas, Henry, Edward and Kenny. We could have done well in the penalty if not for the disqualification of Bryan’s shot. Accordingly, there was a pull back thus it was considered a no-goal by the referee. But…interestingly…Sasi’s penalty shot was blocked by our amazing Goalie, Yung Ming! With all the hoo-haa…we finally lost to Subang Rascals with a score of 1-3.

Semi-Final: Innebandy! Co vs Dalat 1
It was quite an interesting match to watch! Innebandy! Co was given a total of 6-minutes power play against Dalat 1 (who was down with 3 players then). Even with this edge, Innebandy! Co did not seize the opportunity to attack. Daniel Cheah’s deadly shot could not secure a win for Innebandy! Co. They lost to Dalat 1 with just a mere 0-1.

3rd Placing Match: CONTACT X vs Innebandy! Co
With our failure to make it to the final….with our effort thus far…..we were determined not to go home empty handed. Innebandy’s advantage over us was the Goalie, Kao Lin Ken. We knew if we could break their defense, we could conquer them. With team effort and Edward’s strategy to block the goalie finally paid off to give us the THIRD PLACING and the BRONZE MEDALS! Goals scored by Kenny and Edward! It was indeed a sweet victory!!

Finals: Dalat 1 vs Subang Rascals
Very fast speed and high intensity match! Dalat 1 crumbled at the hands of Subang Rascals as both Sasi and Fabien were all over them. The Rascals taking the goal medal with a 4-0 win over Dalat 1.

This is our second time walking away with bronze medals! Our first time was also Dalat League, held in year 2005. Sweet memories, sweet victories! But we will not rest in our laurels…we will continue to strive and make our presence and effort felt in all tournaments to come! So….WATCH-OUT!! 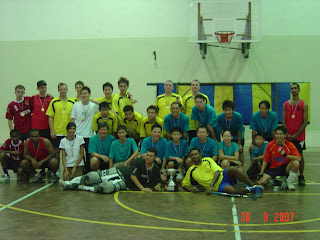 Nicholas was awarded one of the top scorers alongside Sasi of Subang Rascals. Hip! Hip! Hurray! For Nicholas! Keep it coming and make history for Team Contact and Penang floorball!!!
Posted by contactsports