Contact Sports was granted the honour to service SYN (Steven Yeam’s Network) and Gerakan Wanita Malaysia in the Charity Carnival held on 11 February 2007 at Youth Park, Penang. The carnival was organized in aid of several homes and orphanages in Penang.
The exciting day started as early as 6am for all the SYN crew and volunteers, including Contact staff that had to set up 5 games stall. The games stalls were planned with both the kids and adults in mind. Attractive prizes and toys were in store for all who played the games. There were 2 easy stalls which catered to the kids - ‘Scoop-A-Duck’ whereby kids were required to scoop up the mini rubber ducks from the pond and win prizes. The other easy game stall was ‘Submarine Treasure’ whereby the kids were required to drop the one cent coin into the small container that was placed in the aquarium. 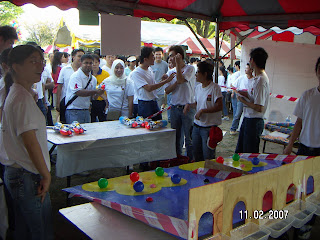 The other 3 games stalls were a bit more challenging which catered to adults. They were ‘The Relocator’. Players for this stall will be required to shoot the color balls with the water gun given into the designated holes within 45 seconds. There was also a ‘Dart Challenge’, and the most interesting and challenging stall was ‘Cosmic Shoot-Out’ or more known as ‘Precision Shoot-Out’. It was a game that was improvised from floorball. Players had to hit the precision balls into designated holes using floorball stick. 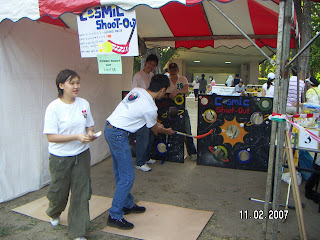 The day was filled with people from all walks of life. The games stalls added sparks to the whole carnival as we saw many kids and adults flocking the stalls, especially towards the later part of the afternoon where most people were done with lunch.
It was indeed a very successful and meaningful carnival as we saw young people serving and raising fund for the less fortunate. It is definitely true to the saying of ‘Service Above Self!”
Posted by contactsports