The 3rd Penang Youthwave Floorball Tournament, ranked as one of the much awaited floorball event of the year was held at the Balik Pulau Sports Complex. Although it seemed to be a long journey from town to Balik Pulau, it did not deter players and supporters to throng the place. They were all just simply floorball maniacs!! A sure good sign of floorball development in Penang! This year, we had a new category, the Under-12 Mixed Team, so as to encourage more junior players to play floorball. 3 teams vied for the gold medals and challenge trophy, and they played a total of 4 matches each, 2 matches against the same team. Indeed it was a very outstanding performance by the kids, possibly the category with the most goals scored. 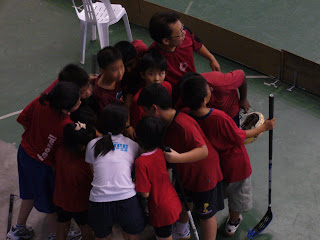 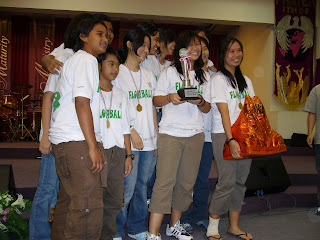 The Ladies' category comprised 4 teams. Frontliners sent 2 teams while Innebandy! Co and G12 (Methodist Girl's School) sent a team each. This year we saw many new faces in the Ladies' category and some excellent play by the more experienced players. Frontliners did not do too well this time round, paved the way for G12 to take home the Challenge Trophy and Innebandy! Co, the second placing. The Top Scorer award went to Goh Simin (Team Frontliners B, also Contact player) with 2 goals. Although there were another 2 candidates with 2 goals scored but award was given to her based on her good play. The Best Goalie award went to Ithrana (Team G12).This year, we had a total of 7 teams in the Men's category. St. Xavier's Institution, considered as rookie of floorball in Penang did the school proud by emerging as one of the semi-finalist. However Frontliners, coupled with skillful and experienced players, beat St. Xavier's Institution with a score of 3-1 to win the bronze medals. The final match was the most interesting, one that got everybody on their toes. The final was between Innebandy! Co and MyTeam. Both teams played very well, but Nicholes of Innebandy! Co scored the final goal to make it to 3-2, a win over MyTeam. It has been three consecutive years for Innebandy! Co (formerly known as Blazing Eagles) to take home the Challenge Trophy. Looks like it is theirs to keep! Deswyn Wan and Kao Lin Ken, both from Innebandy! Co were awarded the Top Scorer and Best Goalie respectively. 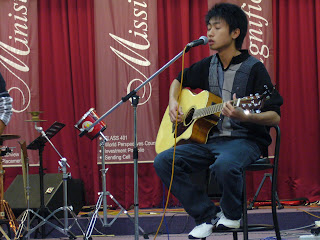 It was truly a great tournament, with great players, great goalies, great teams, great supporters and not to mention great sponsors. Many thanks to Excel again for their generous contribution as well as Express Systems (Pg) Sdn. Bhd., Raine & Horne and Great Jack-In for their contribution towards the rink boards. Prize presentation was held on the following day, 11/6/06 at Full Gospel Assembly, Air Itam. Players and supporters packed the place for concert, prizes and watching themselves on the video clips!
Posted by contactsports