The much awaited event, the first Penang League 2006 organised by the Penang Floorball Association kicked off on 18 February 2006 with a participation from 5 teams namely Innebandy! Co, Frontliners, Contact, Penang Islanderz and Dalat. The opening match between Innebandy! Co and Dalat got the players and supporters on their toes, all wanting to see who will take the lead in the league. 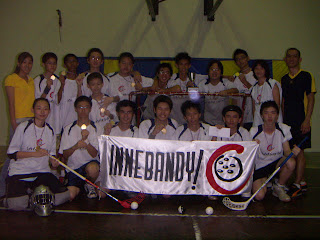 It was definitely a good fight between both teams. Innebandy! Co won the match by a score of 9-3. Losing only a game to Frontliners in the overall league, they took home the Challenge Trophy and having their name marked down in the history of Penang Floorball for being the Champion of the 1st Penang League. Syabas! The 1st Runner-Up went to Penang Islanderz who did fairly well in the league. 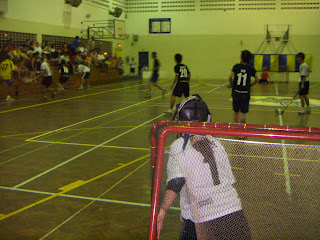 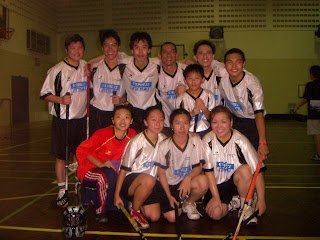 Contact did not do very well in this league, technically. But then, despite the continuous loss in the matches played, it did not dampen the team spirit. Everyone certainly did their best to make every match count. The last game against Innebandy! Co was ultimately the best game in the whole league. At the third and final period, Contact had drew 4-4 with Innebandy! Co. It was indeed a close and tough fight as the team trailed behind Innebandy! Co to allow them the win of 7-6. The league which ran for 6 weeks was held in Dalat International School . The league got many people excited, regular players, non-regular players, non-players, young and old alike. Supporters flocked the arena every match to cheer for their favorite teams. It was indeed a great scene to see many being involved in the development of floorball in Penang whether directly or indirectly. Cheers to all who came!!
Posted by contactsports