In conjunction with the Penang League, Contact Sports organized an alternative league aptly named ‘A-LEAGUE' to cater to the younger players. It was held from the 26th of February till the 12th of March. An alternative league to the Penang Floorball League, this league is designed for all to participate. With restrictions on national players and participants of the Penang League, this is an event that will meet players where they are at. 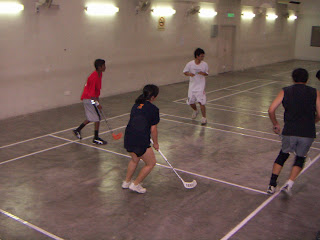 This league was a platform to identify and nurture younger players for the development of floorball in Penang. The league which runs for 3 consecutive weeks beginning 26 February 2006 , attracted the participation of 3 teams from the Frontliners, St. Xavier's Institution (SXI) and Contact Juniors.This league is of no less importance than the Penang League although the latter caters to the more seasoned players, state players and national players. It got many people excited over it, players and supporters alike, particularly parents of the players who flocked the Penang Red Crescent Society Hall for the 3 weeks. Many of the players had their first taste of playing in a league, with official size goalpost and goalkeeper. The first and opening match between SXI and Frontliners was full of intense and actions as we saw the latter trailing behind SXI . The Frontliners had to field in one of their outfield players as goalkeeper at a very last minute to win the match by a score of 9-8. A very close fight indeed! 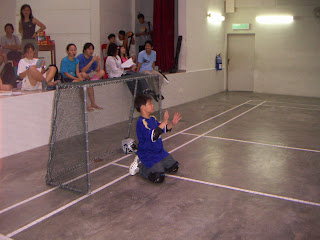 The second match was between Frontliners and Contact Juniors. Contact Juniors comprised mostly kids below 12 years old fought a great battle against the more experienced players from the Frontliners. Although they lost by 11-4, it was truly a great experienced for the first-timers. The final match saw SXI and Contact Juniors battling in the court for the 1st Runner-Up placing. Although small in size, Contact Juniors showed no intimidation to take on challenges. Their never-give up attitude and an excellent spirit truly deserved applause. SXI won the match by a score of 4-3. 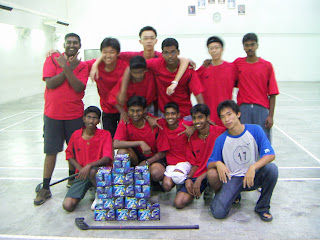 All's well, end's well with Frontliners emerging Champion, whilst SXI got the second placing and Contact Juniors the third placing. The league would not have been such a great success without the enthusiasm for floorball by the players, supporters, helpers and our faithful sponsor, EXCEL isotonic drinks. Hip hip hurray for all who make this event a reality!!!
Posted by contactsports