ContactSports organised its first 3-on-3 Kids Floorball Challenge on Saturday at the Penang Red Crescent Society. The event which serves as a platform to introduce floorball to the public, received great response in terms of participation and cheering crowd. A total of 24 teams of kids ranging from 6-12 years old mainly from churches and organisations participated in the event. Before 9am (the time which the matches were supposed to start), kids and parents were already seen flocking the place. 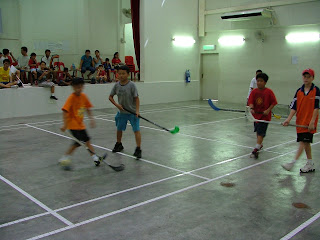 Some were just curious to know exactly what floorball is. Some others were seen practicing their passes and shots (especially those from the Floorball School!) As most of the kids were first timers coming to experience the game, a crash course on how to play floorball was given by Edward just before the matches took place. Both categories (junior and senior, in terms of age) had their matches run simultaneously. 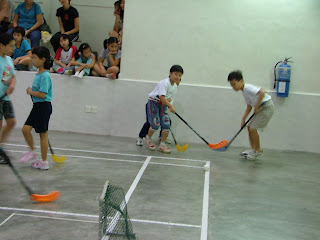 All the kids showed their enthusiasm on court by playing their hearts out, although they were new to the game. The kids from the Floorball School did the school proud by qualifying for semi-finals, and 2 teams, each from Junior and Senior category emerged champions. The junior champions were represented by Josiah, Ashlynn and Nathalynn who made their debut appearance in a floorball competition. The Senior Champions were represented by Eythan, Nicholas and Ross. Overall, it was truly an awesome event with participation from all the teams, cheers and support from the crowd, assistance from referees and helpers and last but not least, contribution of drinks and hampers from Excel Cranberry Isotonic Drinks. Syabas folks! 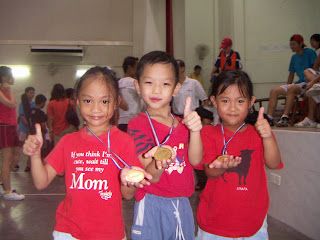