The first 3-on-3 Floorball Challenge hit Penang at the Red Crescent Society. The half-day event attracted 8 men's teams and 3 ladies' teams from various clubs and schools in Penang . Although we had other teams who expressed their interest to participate but could not do so due to exam period, nevertheless with such moderate number of teams all present truly enjoyed themselves. The event saw the debut appearance of junior players who currently train under the Frontliners Club. Calling themselves The Fearless, they showed no sign of fear and intimidation when playing against experienced players like the Penang Islanderz. Although they did not win any matches, they certainly took home an abundance of experiences and are definitely looking forward to more of such events. KDU Penang also made their debut appearance. They were the first college to be a part of floorball development in Penang and we certainly see some good players in the making. 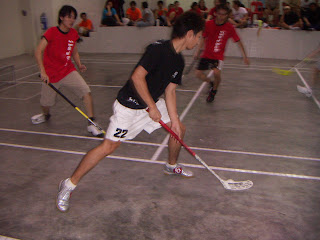 Innebandy! Co. (formerly known as Blazing Eagles) and Penang Islanderz showed very consistent game and won all the 3 matches to top their table. Both teams made it to the finals and fought a good fight on court. Penang Islanderz which showed some really good play were the better of the both that day and won the Champion's title by a score of 4-3. They took away gold medals, Precision balls and hampers by Excel. The 3rd Placing match was no less intense as Team Underdogs and Permata played a very good game as well. Underdogs won the 2nd Runner-Up title to take home the bronze medals. The Ladies' teams – (FH)2, Sempoi and Xcel were determined to play their utmost best to get a good worth of their money and also to win the Champion's title. Team (FH)2 comprising 2 players of Contact Club namely Sarah Ng and Melisa Leng together with Sharon Tan and Tabitha of Frontliners Club managed to top the Ladies' team to bring home the gold medals, Precision balls and hampers by Excel and Precision. Indeed it was a good event for Contact Sports to fulfill its visions in helping people make the right contacts and develop skills and precision. 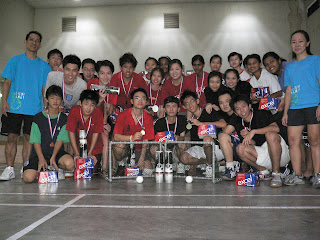 Overall, it was also a good event for many to develop friendships and gain experiences. A good development for the Penang Floorball scene as well! Many thanks to all those who help make the event a succes – Excel for sponsoring drinks and hampers, Red Crescent Society for making its venue available, participating teams from various clubs and schools, and the ardent fans and spectators. Look out for the next 3-on-3 Floorball Challenge 2006!
Posted by contactsports