The months of September and October saw ContactSports take floorball into a number of schools. On September 23, We took floorball into SK Air Itam. The demonstration was targeted at 10-12 year olds and approximately 130 students of both boys and girls participated in the demo. 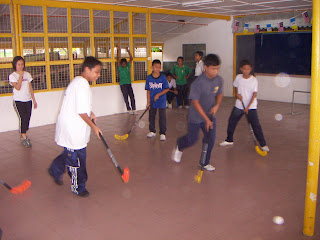 On September 24, we went into an all boys' school, SK Wellesley as part of their Children's Day program to conduct a floorball demonstration. We saw approximately 250 students ranging from 7 to 12 year-olds, getting all excited even before getting a hands-on experience with the stick and ball. Many enjoyed themselves.
September 28, We had the opportunity to go into a Chinese School. Targeted at the 10-11 year olds, we saw approximately 200 students from SJK (C) Jelutong participate in the demonstration. Boys and girls alike regardless of their sizes, showed their interest in wanting to learn the game. The school later purchased a set of equipment and are on their way to setting up a club. October 01, Hutchings Primary School was the venue for our floorball demonstration. Once again it was targeted at the 7 to 12 year-olds as part of their Children's Day program. The interesting thing about this day was that the teachers also came to participate and sweat it out on court. Approximately 150 students and their teachers were present for this unforgettable experience of the adrenalin pumping game. 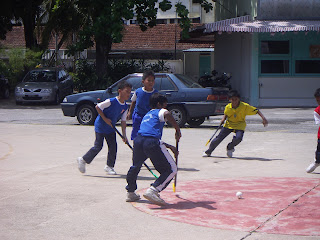 October 10, was the date we went into an all girls' primary school, SRK Convent Pulau Tikus for a session with the 10 year-olds. Approximately 100 students attended the introduction session and viewing of floorball clips. Many signed up on that very day to learn more about floorball and showed interest to join a club.
On October 18, we were taking floorball into yet another chinesse primary school - SJK (C) Shang Wu. Approximately 200 students comprising boys and girls ages 10 and 11 showed their enthusiasm in trying out the newly introduced game.
These two months were exiting in getting the kids to experience the game of floorball. We definately hope that we will have more of such opportunities to share floorball with more kids.
Posted by contactsports