The 3-on-3 Futsal Challenge saw 12 teams, all sweating it out on the court vying for the top 3 placing. This event was organized to provide an avenue for young people to have healthy activity and foster good friendships. The matches were played on round robin basis in 4 groups comprising teams from various colleges, schools and churches. 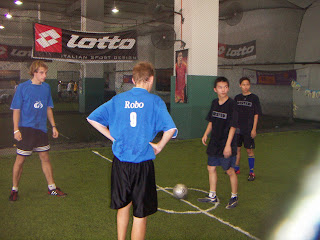 Many supporters came to cheer for their favourite team. Disted College which sent 2 teams won the title with "Disted Chan-Ka" emerging as the Champion. "Average Joe" from Dalat School won the 1st Runner-up title, whilst "Bayan Baru FC (B)" emerged as the 2nd Runner-up. It was definitely a tough fight between "Disted Chan-Ka" and "Average Joe" with a score of 5-3. All the top 3 teams took away medals, hampers and vouchers courtesy of Prangin Sports Centre. Vico graced the event as well by providing chocolate drinks for the players and supporters. Many thanks to all the sponsors, helpers and also the referees, Mr. Saras and Mr. Joshua Lim for a good show! 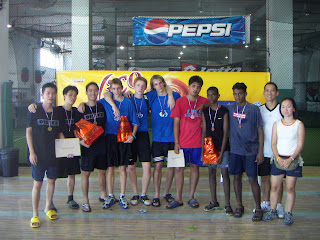