The Moment Everything Happens

Indeed! 7 June 2008 marked yet another day where the moment everything happens…..yes, right smack at Penang Red Crescent Society! It was exhilarating to have two events namely, ‘3v3 Junior Floorball Challenge’ and ‘Play in a Team, Play for Yourself (PTPY)’ running simultaneously. Two courts were set up with one catering to the juniors, while the other catering for the more experienced, seasoned and older players. 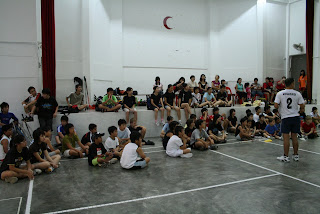 Welcome and Briefing Before the Games

There were a total of 7 teams participating in the junior challenge with 4 teams from St. Christopher International School and 3 teams from Contact Floorball School. The juniors definitely had more supporters; with their teachers, parents and families to cheer them on. To give the juniors more play time, the teams were set to play against one another in round robin system. Team Cheetah (St. Christopher) top the table to bring back the Champion’s title. The 1st Runner-Up went to Team Fireball (Contact Floorball School), represented by Ashlynn, Nathalynn, Josiah and Timothy. They played remarkably well, with very good passes, controls and runs. Their only setback was most likely due to their small-framed body. Learning to play harder against the bigger sized boys would definitely help in the game. 2nd Runner-up went to Team Puma (St. Christopher). The junior challenge ended earlier than PTPY. Prizes were given to the top 3 winners while the PTPY participants took their breather before proceeding to their 2nd rounds and finals. 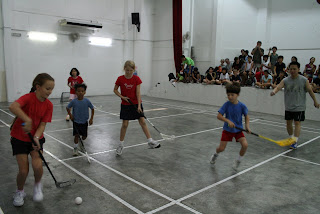 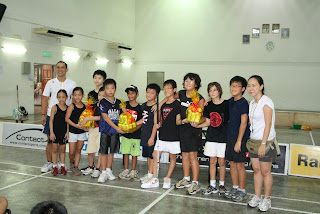 Winners of the Kids Challenge

Play in a Team, Play for Yourself (PTPY) is a new and challenging format that was introduced by Contact Sports for the first time. The format is such that each participant was allocated into a group of 6 players and thereafter formed teams to play 3v3 within the group. 3 games were played within the group in different teams and each win will award the players in the team 2 points, while a draw 1 point. The top winners in each group proceeded into next round by forming new groups of 6 players each, and the elimination process continued. This format was introduced with the aim to help each individual to learn to play with different people and with different teams. We had a total of 24 guys and 18 girls participating in PTPY. Some were quite skeptical of playing with people that do not really know while some could not wait to conquer the court. Nevertheless, everyone truly displayed the spirit of sportsmanship. Everyone played well especially the younger ones who started playing not very long ago. They truly outshined the more experienced and seasoned ones…to name a few, Kai Sheng (Contact), Rooban (Innebandy! CO) and Win Shern (Innebandy! CO). They played harder, fought better and run more than usual. Our salute to these people and we hope to see them rising up to conquer the court soon!

Our special thanks to the referees who helped managed the game….James Looi, Kao Lin Ken, Sam Teoh, Moy Wei Sern and Kenny Khoo. 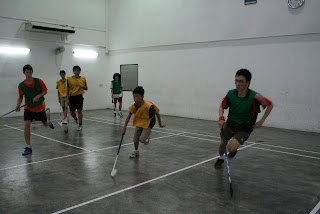 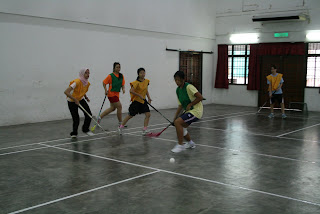