Although it has been just two weeks since we updated the blog, but it seems longer than that with the busy schedule that we have had. Yes, it is just after two weeks of playing against Nanyang Technological University (Singapore), we had the privilege to play against another floorball team from the Meridian Junior College (Singapore). We truly salute the dedication of the Meridians, who in the midst of preparing for their exam, were also preparing and training hard for the upcoming interschool floorball tournament, supposedly to be one of the very important and prestigious tournaments in Singapore.

After the Penang girls debut appearance in the friendly against National University of Singapore (NUS) last year, we had the opportunity once again to play in an all girls team against the Meridian girls. Proud to say, there were 16 of us including goalie (that made up 3 full lines!) Team Contact managed to field 4 girls, Sheryn, Hai Chin, Sophia Lim and Penny.

We played 4v4 with a smaller size court, as it was the request of the Meridians who were preparing for their upcoming tournament. Even with a smaller size court, we knew it would not be an easy game for the Penang girls as many are still very new to the game. Surprisingly, it took the Meridian girls quite a long while before they found the back of the net and scored their first goal. Needless to say, it was our very own defensive error. First period ended with the Meridians leading 1-0. Knowing that we did not have much to show in terms of skills, we know that if we were to play a little harder, more aggressive and run a whole lot more, we do have quite a fair chance of winning the game. With some adjustment to the line-ups, and a little bit more ‘oomph’ to our spirit, we managed to score our first goal to give them a draw. But in less than 5 seconds, when our first line changed, the Meridians scored another goal to give them a lead. End of second period, 2-1. The final period proved to be tiring for the Penang girls due to lack of stamina. However, with a little more movement and passes, we managed to score another goal. With that the game ended with a draw of 2-2, bringing smiles to the Penang team. However, we could have done better! 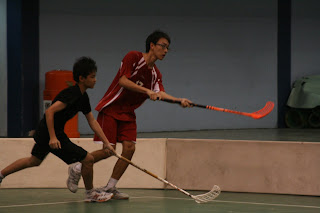 The boys however did not fair as well. Playing 4v4 in the first period and 5v5 in the second, the boys lost their game 2-5. The lost was mainly due to defensive and goalkeeping errors. The boys also had some problems in the mid section of the rink and were not able to move the ball up. Well, the state has many good players but we must admit that we have not developed ourselves to be a strong team yet. With the intensity of trainings picking up, we can only get better! Team contact were represented by Kenny, JinKeet, WaiKit, Bryan, Nick, Sunn, BenOng, Calvin, KaiSheng, and Joshua. Edward did not play as he was coaching the team. 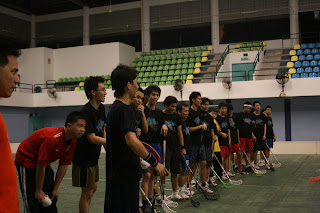 Guys team having a break after the game and waiting to thank their opponents. 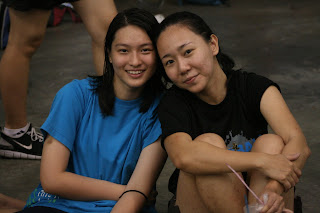 Floorball is about friendships.