With the request of Nanyang Technological University (NTU), Singapore to play both Team Contact and Team Innebandy! CO, we were excited and waited in anticipation for the game held on 24 May 2008 at the Balik Pulau Sports Complex. However, with the lack of time as they were here only for one full day, Contact FireAnts and Innebandy! CO teamed up to play against them so that the ladies and the state team will also get an opportunity to play against NTU.

Both FireAnts and Innebandiens played in their own respective lines. FireAnts fielded in 2 lines of players with Joshua Lim taking his rightful place in front of the goal. For some of the players, it was their first time ever playing in a full size court, and full game of 20 minutes x 3 periods, and also without stoppage of time.

The game started off with the Innebandiens taking the first line, followed by the FireAnts. While most of us were still adjusting to the size of the rink FireAnts conceded the first goal due to defensive error. Everything must have seemed bigger and wider than usual. With the lack of experience playing in an international size rink we were a bit lost in trying to find our positions . We hardly had control of the game for the first period.

However the 2nd and 3rd period proved to be better for us. Finding our positions, our defenses were a little tighter and forwards were taking a whole lot more shots at goal. Although we lost 7-5 when the final whistle was blown, we were satisfied with the achievement of the FireAnts as we managed to score 4 out of 5 goals with the other goal being an own goal by an NTU player.

The aim of the friendly matches were to gain experience, exposure and also to work towards developing a better team. It was also good to establish friendships and we are looking forward to meeting them again in the rink. 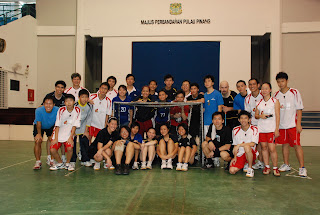