After 3 years of introducing floorball to the folks in Kota Kinabalu (KK), we finally see progress and passion taking its place in the land. Our recent trip to KK on 25th October 2007 was pretty fruitful and rewarding. Highlights of our 1-week stay at KK…..

Kids’ Clinic (26 Oct)
We had approximately 40 kids come to this intro and clinic where basic ball handling was introduced to them. And of course, there was…GAMETIME! (Possibly the most exciting time in the clinic for a all of them!) They were divided into few groups according to their ages, and played a 4v4 with a small goalpost. Awesome time! 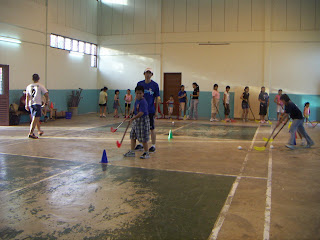 Going through the drills with some adult supervision. 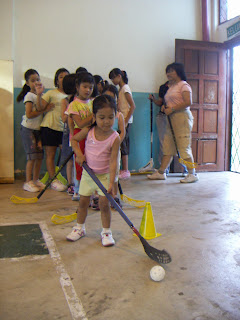 The youngest in the clinic leading the way. 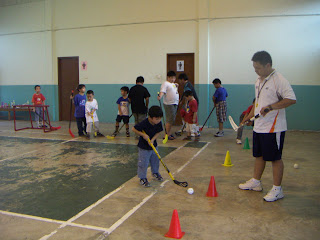 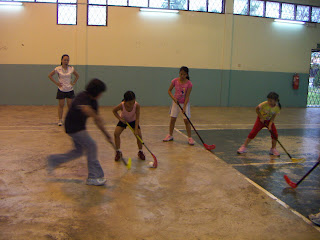 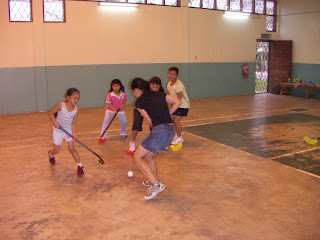 Some youth having a go with the kids as well.

Youth Clinic (26 Oct)
Only an hour after the kids were dismissed, the Youth Clinic began…. We had a short time giving some tips to the goalies, then a simplified clinic was conducted due to space and time constraint. Basic ball handling, passes and different techniques of shooting were taught. No game time for the youth as we were more technical in this session and allowed more time for Q&A. Click here to get a KK perspective on the clinic. 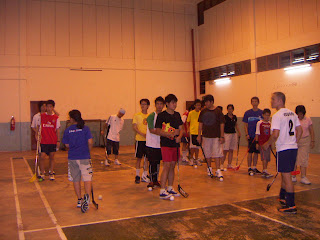 Getting ready for some drills in their lines. 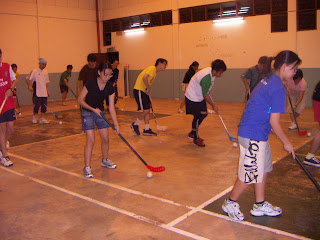 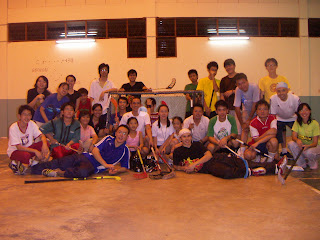 Team Nomads who were present at the clinic.

Inter-Church Floorball Tournament (27 Oct)
The tournament was held at Shan Tao Hall, which housed 4 badminton courts. Awesome! The tournament was played in the format of 4v4 with a small goalpost as there were not enough goalies in KK. The scenario was pretty much the same like when Penang first started floorball. A lot of beginners, but all played their hearts out to win the tournament. Edward was the referee throughout the tournament. We saw a few good plays and some potential players who will be able to take the sport to greater heights! Grace Chapel emerged champion for the tournament, followed by Nomad Floorball Club and Skyline. It was great fun for everyone, especially those who have not been playing for some time. It was good to see them get back into the game! Once again, get the KK perspective by clicking here.

Additional Clinic (31 Oct)
With the heat of floorball over the weekend, the KK folks planned an additional session which was not in the original schedule. Those who were hungry for more of floorball came back. We did more stuff this time round being more technical and even had some fun teaching them how to fall properly as well. Some of the girls were too shy to “roll over”.

Game Time! (31 Oct)
After the clinic (and dinner, of course!), we were taken to another hall for a game! In total we visited 4 halls in KK. All of them are very nice place to play in. Smooth flooring, which is something very scarce in Penang. Anyway, this time round we had the chance to play with the locals. Great time! Great fun!

Apart from all the physical sessions we did, we also had the opportunity to meet with the leaders. We are grateful for the opportunity to impart the vision of developing floorball as a sport for the state. With the vision caught by the leaders, and passion instilled upon them, we trust floorball will also grow in magnitude in KK! And for us in Penang…. We can’t wait for an invitation to go and play with them in the future!

* It’s not all work, we had some fun time too at Manukan Island. Wanted to go up Mt. Kinabalu too but was fully booked. Perhaps the next time we go as a team, we will conquer Kinabalu as well. ;) 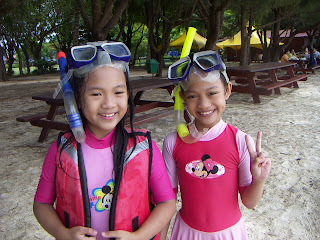 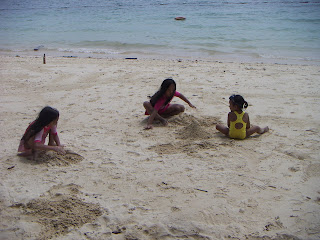 Fun at the beach.
Posted by contactsports