For the first time, an International Floorball Federation (IFF) certified Coaching Course was conducted in Kuala Lumpur, Malaysia from 4-5 November 2008. The course was attended by mostly the Singaporeans and a handful of Malaysians (mainly from Kuala Lumpur). Edward and Penny were the only Penangites represented in the course. Both Edward and Penny had the privilege of learning some coaching pointers from Christer Olsson once again. (Christer was in Penang in year 2003 to give a one-day basic coaching course). 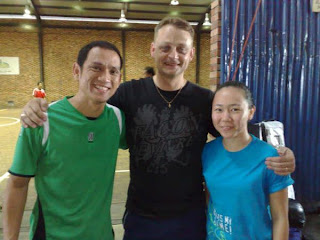 The 2-day course covered basic technical and tactical skills for children and youth in schools, practical training on teaching players and school teachers, as well as basic game plays and special situations. There were classroom lectures as well as practical training in Sports Plaza, followed by game play each day. The course serves as a reminder that coaches need to constantly drill the players in the basics of floorball. Players need to possess basic skills as it is vital in developing not just oneself but also the team in general.

Apart from the coaching sessions, it was a good time to catch up with old friends; Christer and some from Singapore, namely Ngasti and wife, Jill Quek, Martha Quek, Sonia, and Sheila. Of course, it was also a good opportunity to meet new friends. As the saying goes, Floorball is about friendship! 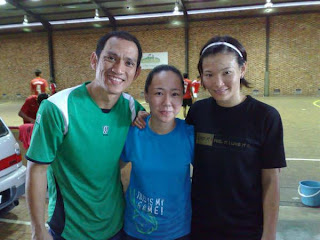