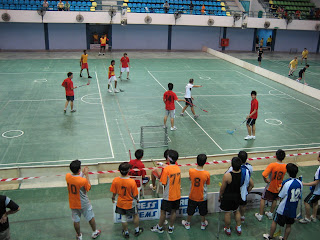 The format for this year was different. It was a 4v4 game without a goalie and a smaller goalpost measuring 60cm x 80cm in a court size of 26m x 16m. 3 matches were played simultaneously in 3 different courts. The change of format was to encourage participation from more teams and indeed there was in total 29 teams. A record breaking number in the history of Malaysian floorball! We had many new faces from the Men, Ladies and Kids category. Strength of each team was more or less even out yet with a mixture of new players and experienced players.

Men’s Category
This category would have the most intense matches with 14 teams battling it out on court to take home the Challenge Trophy. Some new faces were from the Minden Underdawgz (USM) who played very well. No sign of intimidation although they have just started playing a couple of months ago. They would have made it to the semi if not for the lost on goal difference. Another fresh team was the Salibandy! Co (a subsidiary club of Innebandy! Co) led by Mr. Deswyn Wan, (Canadien Spokesperson in Malaysia). The team made it to the finals to meet their ‘Parent Club’. 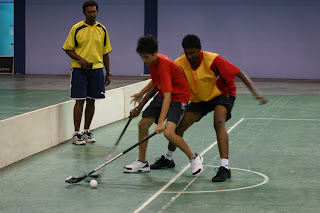 Another team would be none other than our very own, Contact team, which fielded new and less experienced players. Although fresh in blood, raw in the game, Contact did not show any sign of intimidation. They played their utmost best to emerge 4th in the preliminary table. Something to be really proud of! Contact players were David Ng, Clictus Teh, Isaac Ang, AndrewNg, Joshua Lam and Kenny Khoo (the only experienced and seasoned player)!
Champion: Innebandy! Co
1st Runner Up: Salibandy! Co
2nd Runner-Up: The Young Skywalkers
Top Scorer: Chiam Ter Min (The Young Skywalkers)

Ladies Category
Once again, Contact did not manage to send any ladies’ team to Youthwave Floorball Tournament. As such, Goh Simin was ‘loaned’ to Innebandy! Co for this tournament. She played very well to win the top scorer award for the second year! With the downsizing of number of players per team, there were in total 10 ladies’ team. 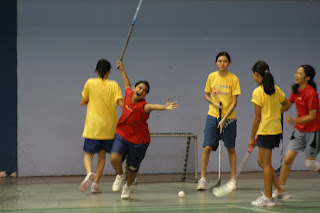 Ladies’ matches were not any less intense compared to the men’s. Most of the goals scored were penalty goals. Minden Underdawgz was the only new team in this. The rest were from Frontliners, Innebandy! Co, Methodist Girls’ School and 412 Unlimited. Champion: Frontliners-Roses
1st Runner-Up: Innebandy! Co
2nd Runner-Up: G12 Dashs (Methodist Girls School)
Top Scorer: Goh Simin (Innebandy! Co/ Contact)

Kids’ Category
This is perhaps the most interesting category. As the age range was from 7-12 years old, thus the kids came in various shapes and sizes. Contact Floorball School had a mixture of girls and boys in the team and most of their sizes were relatively small compared to the others. Known as team Floorball Kids, they battled it out against the ‘giants’ of other teams with true spirit of sportsmanship. Some of our other Contact Club kids formed another team, named Impact. This team did fairly well in all the matches. Champion: Dalat Eagles 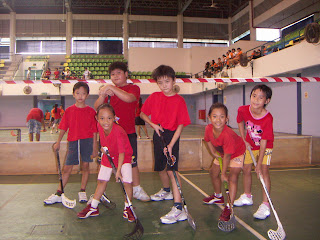 A record of thanks to Yeo’s for sponsoring the drinks and prizes and also the helpers from Living Word Church, Georgetown Baptist Church and Reservoir Garden Baptist Church!
Posted by contactsports